has always wanted to be a writer.  She also loves spending time with her friends, so after a few cosmos at the pool with her friends, the idea for UNFILTERED was born.  Together the group wrote twelve books about a group of strangers who share a dark secret.. . and who all want to find love (because, really, who doesn't?).


Keep up to date on UNFILTERED news on Payge’s tweets or UnfilteredBooks.com.

has a weakness for trying new things. Some of those have been rather unwise (going for a Harley ride in the rain while wearing nothing but a bikini and boots) and some have been much wiser (writing a book series with twelve friends). But it’s all been a lot of fun.

Keep up to date on UNFILTERED news on Ronnie’s tweets or at her website http://ronniedouglas.com/.

likes a calm life, contrasted with the occasional walk on the wild side. She loves her friends and the opportunity to try something new, exciting, and fearless … like writing in the UNFILTERED series with those good friends.

is a life-long romance reader.  She was inspired to write her first new adult novel after making a pact with her college friends.  Her “logical decision” threshold stops at  two poolside margaritas.  A science fiction nerd and a sucker for happy endings, Danni loves sushi, zombie movies and sarcastic t-shirts.

likes sexy guitar players and a hot love story, which is why she jumped at the chance to write both in the Unfiltered series. She’s grateful to good friends who encourage her to break out of her shell and try new things. When she’s not writing, she’s taking long walks with her big hairy dog and thinking about writing.

loves a good happily ever after and angsty, brooding heroes. So when Payge pitched the idea of writing a new adult series after a few poolside drinks, she was excited to write her own broody boy for the Unfiltered series. Jane’s free time is taken up by yelling at her cat to get off the counter and watching horror movies.

For more about Jane, check her out on Twitter or at UnfilteredBooks.com.

has always been a bit on the quiet side and, sadly, not because she’s hatching plans for world domination. When she’s not curled up with a good book Raychel loves hiking and swimming. She had to be convinced to let the world read her story. Which isn’t necessarily a bad thing . . .

Keep up with Raychel at UnfilteredBooks.com.

has spent her entire life with her nose buried in a book or her head in the clouds, all of which led to the obvious career choice—writing. So she didn’t hesitate when twelve of her best friends suggested they should write a New Adult series together.  Now, instead of spending her days in the clouds, she spends them writing steamy make-out scenes and talking about her love of all-things-chocolate on Twitter.

You can keep up on Meg and all the UNFILTERED news on Twitter or at www.megchance.com.

has never met a creative endeavor she didn’t like. Dancing, singing, drawing, jewelry-making … You name it, she’s probably tried it. But writing has always been her one true love, whether it was scribbling story ideas in her notebook during class, or getting together with twelve of her friends to write a collaborative series. She can generally be found hunched over her computer typing away, or with a pen in one hand and a coffee in the other writing by hand on actual paper. She will continue to live vicariously through her friends’ Twitter accounts until the peer pressure wears her down.

drinks coffee, wears blue jeans, reads across genres, and will jump at any opportunity to do all three at once. She favors liquid eyeliner over pencil, red wine over white, and Alien over Predator. Writing a hot series of books with twelve good friends is one of the most exciting things she’s ever been a part of.

tends to talk without thinking which, when combined with her strong opinions, means she’s the most likely of her friends to get in trouble. She’s a huge fan of sleeping, reading, and daydreaming, all of which have been in short supply as of late. So she’s very thankful that her friends suggested writing a group project because it gives her an excuse to indulge in what she loves: romance.


was the quiet kid at the back of the class, writing stories when she was supposed to be listening. She got louder, and her writing got better. She still loves to writing and reading and getting outside when the weather allows it. Walking, running, biking, swimming—it’s all good. 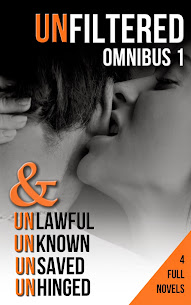 "A fun, rollicking start to an exciting new series concept. . . .Adam is hot, hot, hot and readers will want him as badly as Sasha does." -- RT Magazine, 4 stars (out of 4.5) on UNFILTERED & UNLAWFUL